The Battle Between Soul and Ego 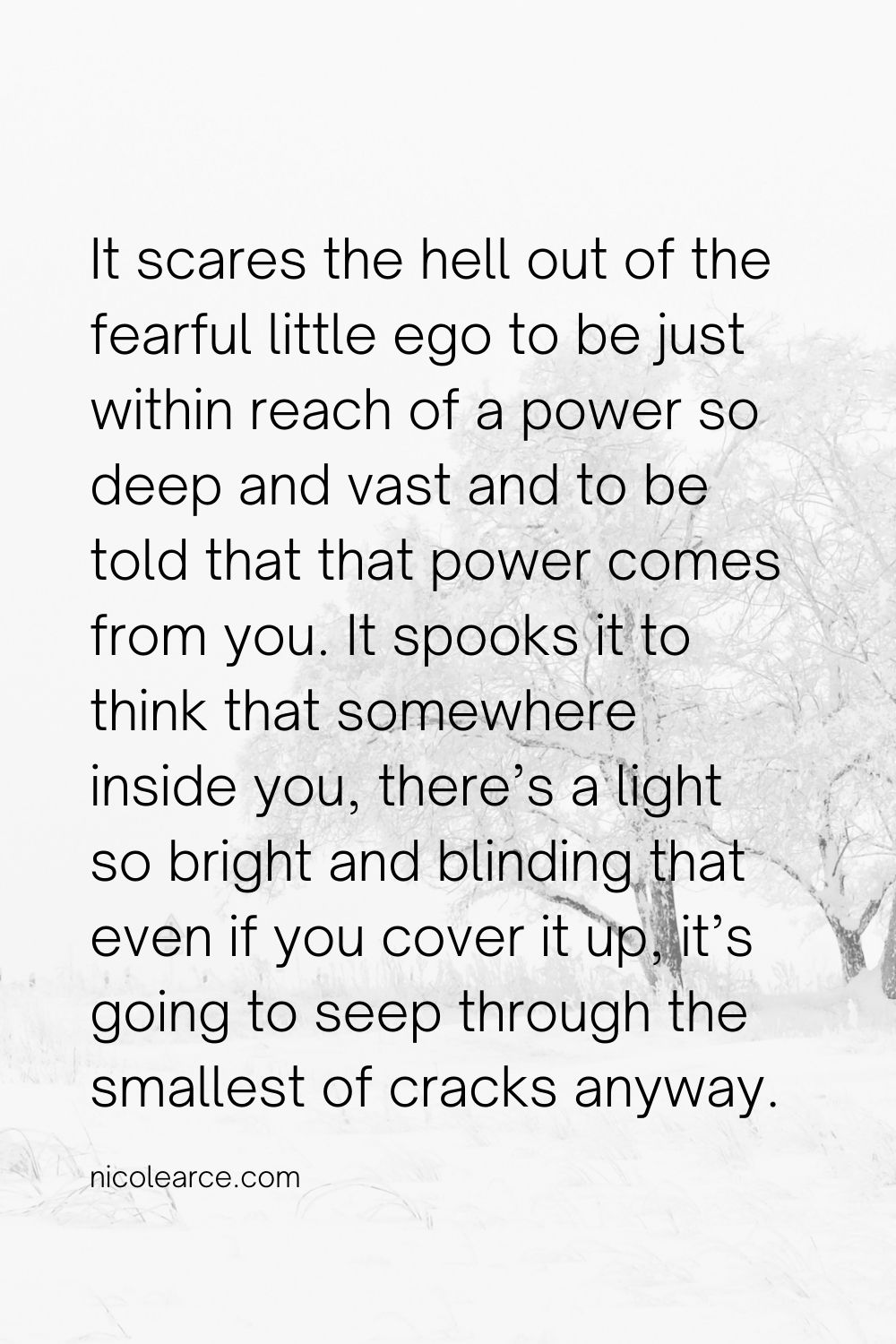 Palms are sweating. Heart is racing. There’s a huge cloud of anxiety that looms overhead. What if you can’t keep this up? What if, after the initial burst of excitement is gone and you’ve got nothing to ride on but your own manufactured enthusiasm, you find you backtracking on yourself? What if this wasn’t what was meant for you? What if you went into this head-on for the nth time in a row only to shrink back once more?

That only means one thing. You’re human and you’ve got the ego to prove for it. And for as long as you’re here in human form, your ego will always be there, fighting in some way or another to gain control over your facilities. Call it evil, if you will. Sometimes, it often feels as though the ego is an evil thing. It’s always lying to you. It’s always making things up to hold you back, keep you away from jumping off a cliff and soaring into the sky.

But you know humans. We’re scared of a lot of things, and often, we make those things up. We even legitimize these fears by turning them into scientific concepts, as if giving these things a name nobody can’t pronounce is going to make them easier to deal with. I know, I know, people will argue that giving them names will make you feel you’re not the only person in the world with illogical fears.

That’s not big news, is it? We all have illogical fears. We’ve all got something to be scared of that we’re not supposed to fear. Sometimes, some people’s fears are more illogical than others, like fear of butterflies or fear of cheese, but in a world where giant butterflies swooped down on people and ate them or cheese emitted a noxious gas that killed people that came within a meter of it, that doesn’t sound so illogical, does it?

It’s all got to do with how we see things. We have all these little fears and phobias based on how we see the world, and the more we focus on them, the more we turn away from facing the one big fear we all have. It’s the fear no one rarely talks about, but it shows up each and every damn time you make a move toward your dreams.

It’s not a fear of failing. A lot of us have been conditioned to believe that we’re not good enough, not perfect enough, not deserving enough. We’ve been led to believe that, if we fail, it’s somehow to be expected—because we’re not enough. So we console ourselves by telling ourselves it’s better to have tried and failed or that at least we landed among the stars when we’re actually shooting for the moon. We tell ourselves little stories to soothe our crying souls.

That’s what it does. It tells you little lies and pretty stories about why you can’t have what you want and it’s okay that you don’t have yet what you want because either life is cruel so you have to suck it up or you’re going to get everything you want and more when you die and go to heaven. We’ve built entire religions and educational systems and governments simply to reinforce that little lie.

Wake up, people. Life isn’t cruel—you’ve seen that for yourself—and there is no heaven or hell except the heaven or hell we create for ourselves. The ego doesn’t know that, even though it pretends it does. It has no inkling of anything that the logical, rational mind cannot grasp.

That’s because the ego is there to keep you locked in your humanness. Its purpose is to make you believe you’re a bag of flesh and bones and maybe some extraneous fat that you blame on genetics or a disease. You can walk and talk and maybe think a little bit as was taught to you by your parents and teachers and the people you watch on TV, but for the most part, you’re really just a body with thoughts and feelings so mysterious that nobody knows where they come from. They can try to know, but all we have so far is this thought comes from the back of your head and that thought comes from the center and that thought comes from everywhere and nowhere at the same time.

See what I mean? We try so hard to keep ourselves human that we limit ourselves to the things we can see and hear and smell and taste and poke and prod with our cold metal tools. Those things aren’t so scary. After all, we actually know they’re there. Or the ego actually knows it’s there.

It’s the things outside the limits of the ego that we’re scared of the most. These things the ego can’t grasp even for just one bit, even though it might pretend it can. It’s the things like having your own private channel to the divine, your own source of wisdom and guidance coming from somewhere within instead of some holy book or a TV evangelist.

And it’s things like having access to the one true source of power in the universe, the very same power that created the mountains and the rivers and the hundred bajillion stars sending their light down to us from millions and billions of years ago. There’s nothing you have to do to find that power in you. There’s no course you need to enroll in or pilgrimage you have to go on or a loved one you have to stab in the heart with a crystal knife as a sign of your devotion.

You only have to acknowledge it’s there.

You only have to believe it’s there.

And you only have to make space for the acknowledging, the believing, and the receiving from this inner power.

It scares the hell out of the fearful little ego to be just within reach of a power so deep and vast and to be told that that power comes from you. It spooks it to think that somewhere inside you, there’s a light so bright and blinding that even if you cover it up, it’s going to seep through the smallest of cracks anyway. It thinks, once you’ve found this light and power within, you’ll have no use for it and chuck it out the window. (Tell your ego not to worry, though, because it’s not going away for a long time.)

That’s why we clamp down on our dreams. We shut ourselves down when we feel the light is burning a little too big or too bright for other people’s sensitivities. We shrink back in the shadows and we try to comfort ourselves by saying, “it’s not the right time,” or “God has other plans for me,” or “maybe I shouldn’t be dreaming too much.”

We’re scared of our own power. And we bleed our very souls dry when we try to assuage that fear. The sweaty palms? The racing heart? The huge cloud of anxiety that’s bearing down on you? It’s a sign. There’s a battle going on inside of you between the ego and the soul. The former wants to keep things the way they are, the latter can no longer stand being kept in the dark.

You know, in your heart of hearts, which one wins, don’t you? Make space for the victory that’s looming just up ahead.