The Only Kind of Work You Need to Do 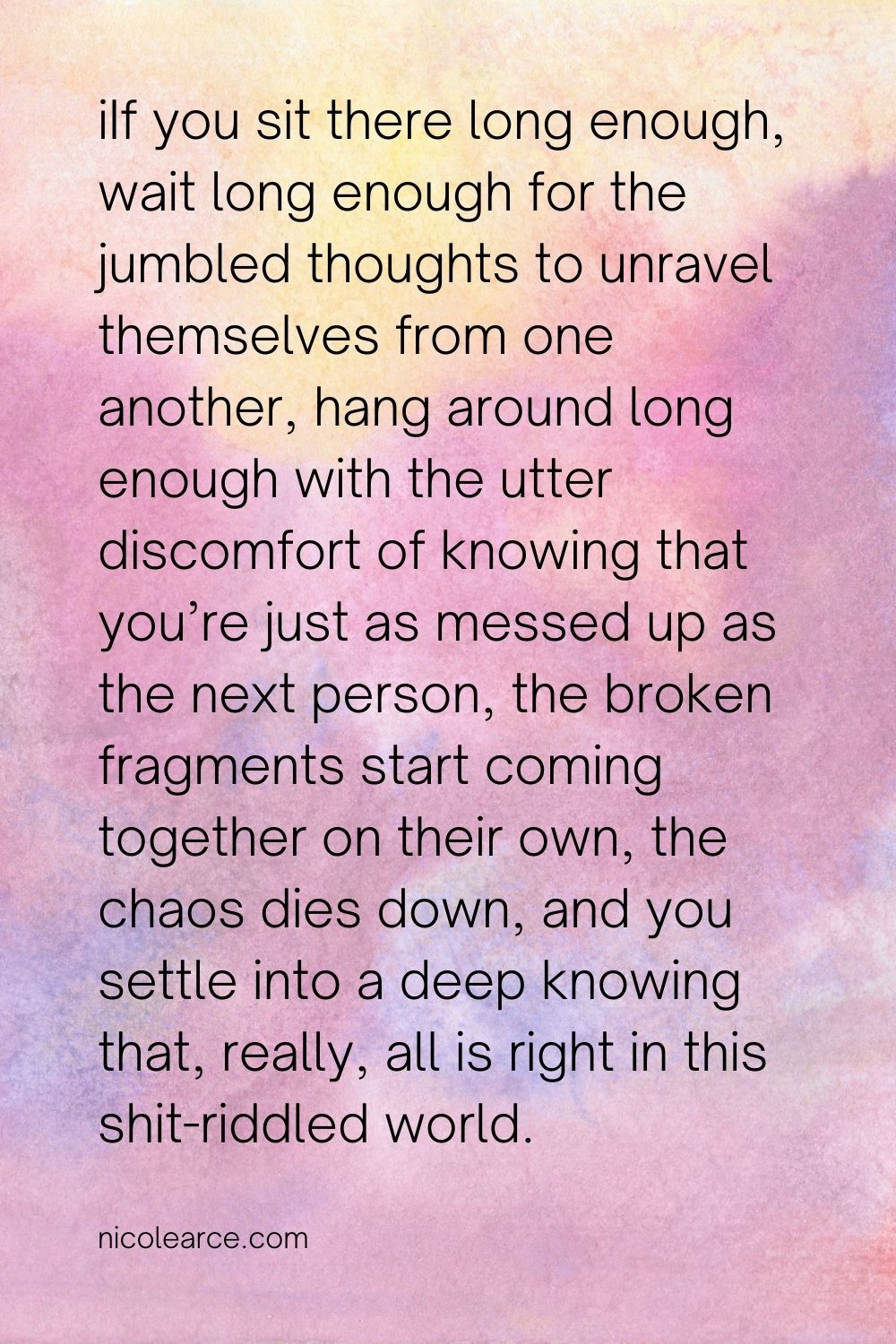 I have a confession to make.

But I hate it. I have to drag my butt to the chair to get myself to do it. I’ve even briefly considered taking a complete 180 on my career path because it’s just no fun at all. Maybe I could go on to become a professional gift-wrapper. That’s a lot of glitter and glue and Styrofoam. Or maybe I could make bread and sell it. Or I could go back to school and learn to do something that doesn’t involve cutting my heart open and pouring out all its contents for all the world to judge every day.

See, that’s part of what makes it so hard. Every day, you write your heart out. Every day, you hit the publish button. And every day, you hold your breath in anxiety, wondering whether people will see, and read, and care enough to think about what you’ve written while they’re in the shower or when they can’t go to sleep at 3 a.m. or when they’re mindlessly scrub, scrub, scrubbing away at the dirty corners of their lives.

And before you know it, the day is over. And before you can even let your breath go, you’re forced to move on to the next day, the next idea that needs to be put on paper, the next message that demands to be written down lest you regret it for the rest of your life.

That’s how it’s like for people who take things to heart. It’s a constant giving of yourself to the life you were meant to be living. That’s what I’ve been unknowingly doing all my life, but I’m also slowly but steadily learning to not hold my breath in anticipation of what the wrong person might think of the message that wasn’t meant for them. But that doesn’t make it any easier.

Because, more than having to face judgment from a bunch of faceless people, writing is really just a confrontation with myself. Each time I write, I’m forced to come face to face with the parts of me I push down the rest of the day. The parts I’d rather not show the world but inevitably show up the minute I hold pen to paper. The ugly parts and the scared parts and the parts that keep wondering if I’ll ever be good enough despite overwhelming evidence to the contrary.

To hell with everything the movies tell you about the writing life. There’s neither glamour nor whimsy. There’s just you and all the little pieces of you that broke off because you can’t seem to take what they’re trying to tell you. And all these broken fragments keep coming to the surface, fighting their way through to be heard, and your job as the writer who writes from the heart is to look at all those pieces of you straight in the eye and take them for what they are.

There’s no other work that’s more confronting than that. Nothing else forces you to come face to face with your deepest fears and love your hardest pains than simply looking yourself in the eye and saying, “So, this is who I am. I’m kind of fucked up, am I not?”  It’s writing for me, but it obviously doesn’t have to be for you. It can be dancing or crunching numbers or catching fish. It doesn’t really matter what it is. The work you were meant to be doing is the work that forces you to come face to face with you.

And anyone who’s come face to face with their true selves stripped of all illusion about their place in society as defined by the degrees they’ve earned and the houses they’re living in and the roles they’re playing and the money they’re making and the girls they’re dating and the gods they’re praying to and the number of plant ceremonies they’ve gone to and all that useless stuff knows.

You who’ve done the work know that if you sit there long enough, wait long enough for the jumbled thoughts to unravel themselves from one another, hang around long enough with the utter discomfort of knowing that you’re just as messed up as the next person, the broken fragments start coming together on their own, the chaos dies down, and you settle into a deep knowing that, really, all is right in this shit-riddled world.

And that’s why I do what I do. That’s why I put myself through the raucous noise of my know-it-all mind that’s every day desperately trying and failing to take over my life – so I can get to the place where no noise matters at all. That’s why I sit and stew in my own muck until I no longer give a fuck about my muck – because knowing yourself, all your gifts and all your flaws, is the only way to get to where we all want to go.

There’s a saying that’s often attributed to Robert Frost. It goes: “The best way out is always through.” If going through is not the kind of work you’re doing, maybe it’s damn time to give what you do a second thought.