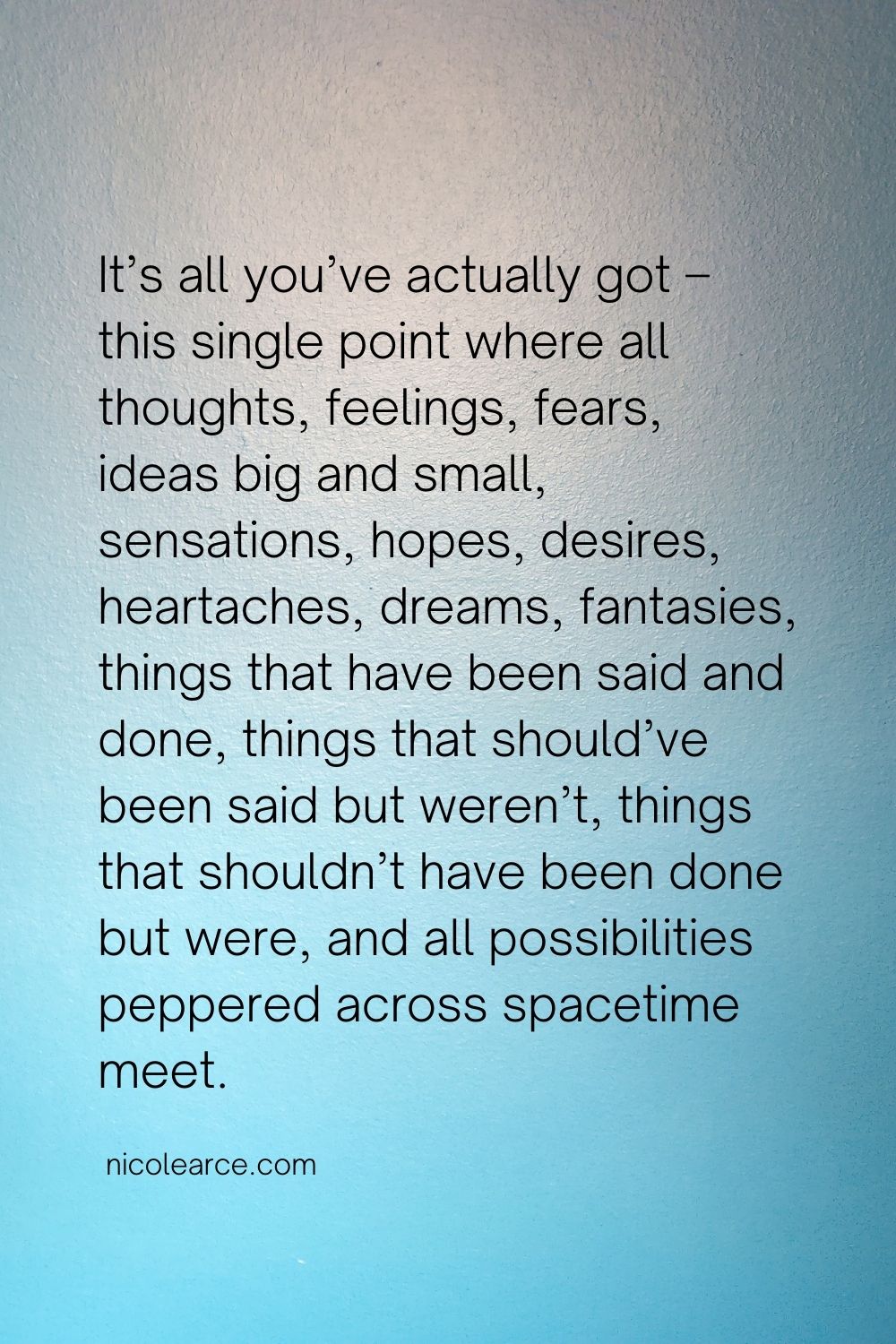 I used to question if I was being too much.

Perhaps I was too intense. Perhaps people just wanted me to scale back a little. Perhaps I should chill a little, have pointless casual conversations with people a little, be a little bit less me a little.

I no longer do. It just doesn’t make sense to me anymore to live life according to other people’s expectations. After the spectacular year of thriving according to my own rules and standards, I just don’t see the point anymore of diminishing who I am to make people around me comfortable.

Because here’s a harsh truth about me I couldn’t take before. I make people uncomfortable. I make people squirm in their shoes. Ninety percent of the interactions I have with people are stiff and awkward because they want to get as far away from me as possible. I simply don’t have whatever it is that makes everyone else seem to enjoy pointless conversations and sitting around and doing things that don’t feel good to the soul. I’m just not human in that way.

I used to hate that. I used to want to do everything I could to make people around me think I’m just like them. I wanted them to feel warm and safe and not confronted by thoughts and feelings they’d rather shove down inside when they’re with me. I wanted to make them like me, so I did my best to be more like them and less like me.

That never did me a lot of good, except that it drove me so far back I finally was able to see how much my life was lagging so far behind.

There comes a point in our lives where we have to hit rock bottom so we can discover that we have the strength to climb back up. It’s not easy reaching this point. I have this theory that only those who have the true courage to look for their true selves can ever get here. The rest are just too scared to even think about what they’d find down there, so they’d rather distract themselves with things that don’t matter.

That’s where I went. And over and over again I fell back into the pit. Yet over and over again I was able to climb back out. How? It wasn’t because I fought to climb back out but because I allowed myself to stay at rock bottom without needing to struggle back up. I gave up. I surrendered to rock bottom and to all the ugly thoughts and fears that festered around me during that time. I allowed them to run through me and around me until they no longer did.

It wasn’t easy, this hitting rock bottom thing. It was long, tiring nights of crying myself to sleep and longer, more exhausting days of wondering when all this was going to end. And, of course, it interrupted my entire life in the process—my work, my relationships, my health, my sense of where I belong in the world. All of that turned upside down over and over again, until one day it stopped. Until one day, I finally felt a sense of peace and calm come over me. Until one day, I realized I could finally take the first step up and out of rock bottom.

That was when I realized I no longer have to pretend to be someone else. I only have to be me, and if something goes amiss, I only have to be even more me to put things right in my life. It’s only been a year since I found my way back out, and yet I feel like I’ve already come so far. And also, I feel like there’s still such a long way to go to wherever this path I have chosen is going to take me. But the craziest thing of all is that I feel like there’s really nowhere else to go, nothing else to reach for but this moment right here.

This website uses cookies to improve your experience while you navigate through the website. Out of these cookies, the cookies that are categorized as necessary are stored on your browser as they are essential for the working of basic functionalities of the website. We also use third-party cookies that help us analyze and understand how you use this website. These cookies will be stored in your browser only with your consent. You also have the option to opt-out of these cookies. But opting out of some of these cookies may have an effect on your browsing experience.
Necessary Always Enabled
Necessary cookies are absolutely essential for the website to function properly. This category only includes cookies that ensures basic functionalities and security features of the website. These cookies do not store any personal information.
Non-necessary
Any cookies that may not be particularly necessary for the website to function and is used specifically to collect user personal data via analytics, ads, other embedded contents are termed as non-necessary cookies. It is mandatory to procure user consent prior to running these cookies on your website.
SAVE & ACCEPT