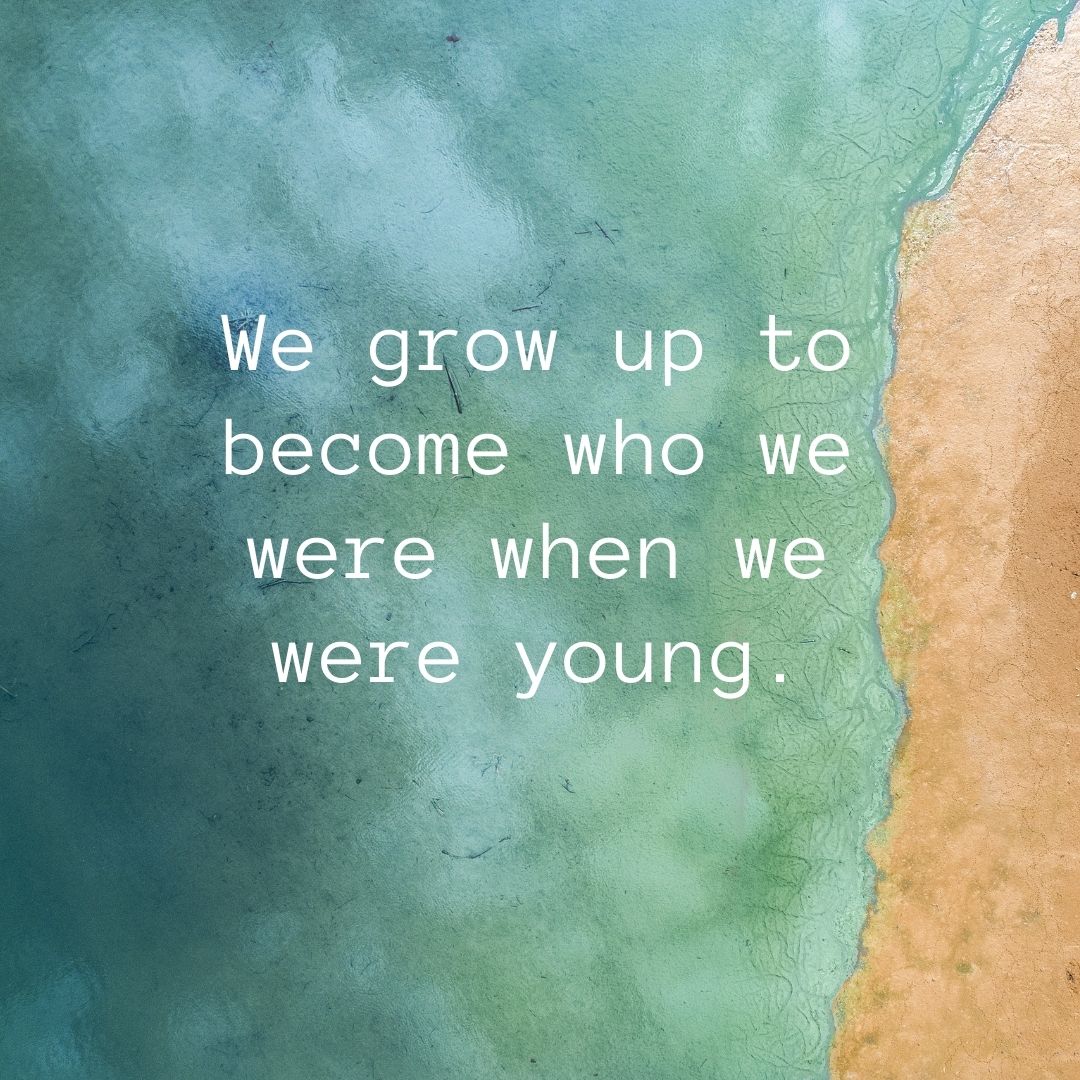 Somewhere on the internet, a wise man in the guise of a random anonymous commenter on a random blog post said, “We grow up to become who we were when we were young.”
I was a different person when I was young.

I did not give a fuck that I couldn’t say some words right. Who in their right mind even knows how to say the word “society” just by looking at how it’s spelled? I didn’t. And when an adult had to tap me on the wrist for saying it wrong, I didn’t mind. Somehow, even at eight years old, I knew my ability or inability to say certain words properly didn’t have any impact on who I was.

I did not give a fuck when the cool kids threatened to kick me out of their circle. I just didn’t. I didn’t care when they got mad at some silly thing I supposedly did. I didn’t hate them when they unfriended me—because, mostly, I knew we were going to be friends again, if not the next day, then pretty soon.

I did not give a fuck about meeting other people’s standards, mainly adults’ standards. Parents, teachers, aunts, uncles, and even the neighbors had plenty of expectations, yet none of those mattered to me. To them, I needed to be the good daughter, the responsible sister, the straight-A student. I needed to be the perfect little goody-two shoes they expected to grow up to be the perfect woman, the trophy wife with the hot body while raising three perfect adults-in-training to boot.

I did not give a fuck—mostly because I never understood what all those things that were so important to adults meant. I wasn’t resentful. I just didn’t get what all the fuss was all about.
Of course, the next several years after that, I began assimilating other people’s thought patterns. I began to understand what the fuss was all about. And even though I tried to make it look like it was no big deal, all those things I didn’t give a fuck about absolutely became the biggest deals in my life.

A stamp on my wrist that says I’m just like them.

A brand on my forehead that signifies I am one of them.

For a huge portion of my adult life, those were the things I chased. I went after people I thought were the source of love. If this man would simply spend more time with me than his video games and if these girls would invite me to their Saturday nights out, I’d feel validated. I’d feel like a real person that people actually saw, heard, and wanted to be around with.

Never mind that, as a little girl, I barely acknowledged other people’s impact and influence in my life. Never mind that I was a badass eight-year-old who breezed through life taking in stride everything that it sent my way, with zero care about what other people thought of me or what I was doing.

For the last few months, I’ve been drawn to a voice inside me telling me to go back to who I was at eight.

Perhaps it is the constant judging that we put ourselves through on social media. How we judge other people to no end and make excuses for these judgments. “All people judge. I can’t help it.”

And how we judge ourselves just as harsh! Ever since I started learning the mechanics of how to write and edit what I’ve written, my inner editor has never turned off. She’s always there in the background, subtly shaking her head in disapproval every time I did something that wasn’t 100% up to her standards.

I haven’t been very good to myself. The smartass eight-year-old girl was forced to grow up. And growing up, she learned to manipulate the system to get the results that others expected of her. In the process, she lost herself.

I’m not the overachiever people think I am. I was simply lucky to have natural talents that allowed me to be tagged “best in class” from pre-school to college.

I’m not a hard-driving leader. My natural talents simply benefited those who were close to me.

I’m not an inspirer. I simply am used to talking about things that somehow lifts the spirit because I spend a lot more time in contemplating these things than most people do.

I’m not a helper. I’m a kind person, but I know the best way to help others is to allow them to realize they have all they need to help themselves.

I’m not even a writer. I simply read a lot of books as a little girl, and that somehow turned into a talent for using words to bare my soul.

All the things I have shown to the world, were simply mirrors that reflected back to others the person they expected me to be.

They’re merely roles I took on for myself.

The role-playing began early on, that’s for sure. But social media simply created a situation ripe for pretending to be something I’m really not.

I spent more than 10 years on social media nurturing roles I didn’t really choose for myself.

Not all of my social media experience was bad. I had Elon Musk like one of my news stories on Twitter. That was epic! It was the closest thing I had to having a billion dollars within my vicinity. And I had the lead singer of one of my favorite bands from the 90s retweet me.

I also met an awesome nutrition coach on Facebook who operates from the heart. I kept in touch with my closest friends on Facebook, and though we rarely talk these days, it still feels like time never grew between us when we do. And I keep in touch with family who are away on social media too.

And the instructions from the inner voice—the one that knows it all—are clear as a bright blue cloudless sky in the tropics. It’s time to quit this game of pretend. It’s time to stop playing someone on social media while being another person outside of it.

Social media, to me, has served its purpose. There’s no longer any reason for me to stay.

What about reaching more people?

What about promoting my blog?

What about buying from local businesses whose only online presence is Facebook?

What about all the useless odds and ends that, in truth, eight-year-old me doesn’t give a fuck about?

All she did was read trashy books about blond, blue-eyed identical twins who somehow never grew out of high school. She learned about space. She pored over architecture magazines. She made beautiful glittery things with her hands and she loved every second of it

She enjoyed directing and starring in the class play like she was never a shy, soft-spoken girl to begin with. And she shrugged off anything that should’ve ruffled her delicate little feathers but never did.

In other words, she knew how to live, whether or not people were watching. What a weird thing for her, for you, for all of us to forget how we actually started out equipped to take on life from the start.

All the things we obsess about and all the time spend on social media so we can obsess more about these things never really mattered.