An Ode to the Person Who Created S’mores 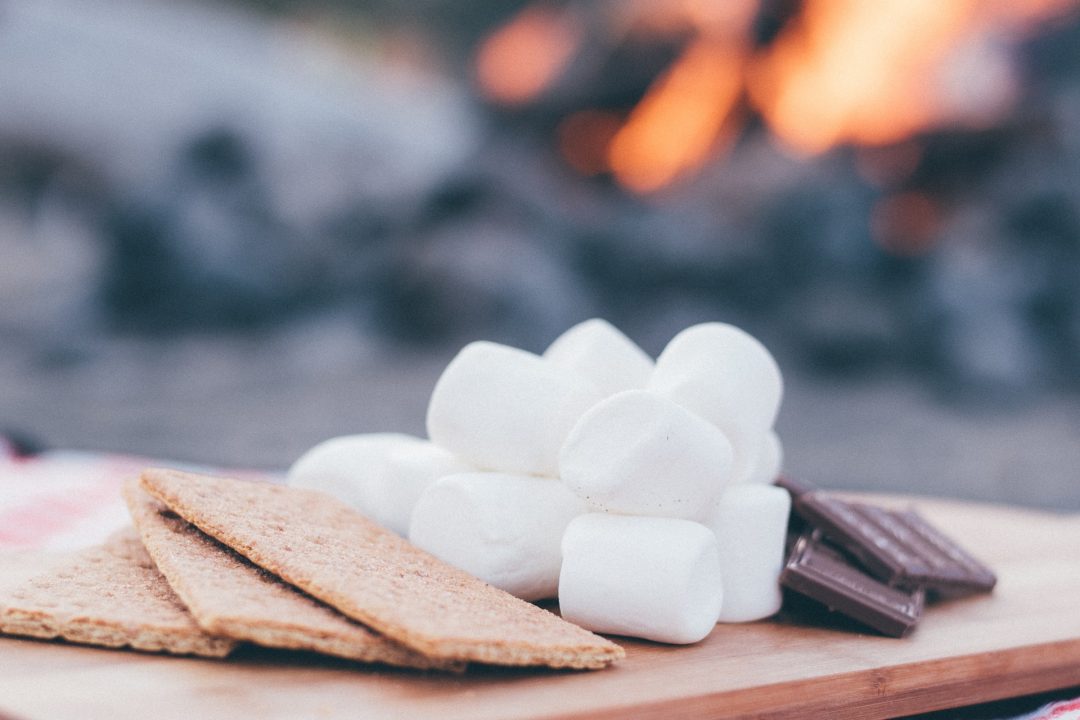 Do you ever wonder who created s’mores?

This warm, sweet, and gooey staple of every child’s campfire dreams is more than a classic treat.

It’s a culinary masterpiece, which is why it’s only fitting that we pay homage to the master artist who created s’mores.

So, Who Exactly Created S’mores?

Culinary historians point out that there are a lot of potential predecessors to the s’more.

Some point to the Mallomar as the prototype of modern-day s’mores.

A Mallomar is a traditional treat made of a round graham cracker with a generous dollop of marshmallow. The entire thing is coated in a layer of chocolate.

When Nabisco sold the first Mallomar in Hoboken, NJ in 1913, sales were limited only from September to March.

Today, Mallomars are still a cold-season treat, even with the invention of refrigerated trucks.

Another contender is the Moon Pie. The Chattanooga Bakery in Tennessee made the first Moon Pie.

According to local folklore, Earl Mitchell Sr. asked a coal miner what snack he wanted to eat. The miner said he wanted something that had graham crackers and marshmallows. He also said he wanted it to be “as big as the moon.”

It was in 1927 that the first recipe for s’mores appeared in a publication called Tramping and Trailing with the Girl Scouts.

The book had all sorts of camping tips and guides. It also contained step-by-step instruction for making s’mores.

The book gives a certain Loretta Scott Crew the credit for the first s’mores recipe ever published.

Ms. Crew is widely recognized as the person who created s’mores.

S’mores are some of the most beloved campfire desserts. It’s right up there with apple pies, cinnamon rolls, and banana boats.

The young and young at heart always have a place in their hearts for this nostalgic sweet treat.

In fact, we love it so much that s’mores have gone way beyond the campground. They’ve come into our kitchens with the invention of the indoor electric s’mores maker.

If Ms. Crew could only see it now, she’d be delighted to see how her masterpiece is held dear by kids and adults alike.

Not just a passing fad

A few decades before Ms. Crew’s recipe showed up in the Girl Scouts book, roasting marshmallows on a stick over open fire became a thing.

On Aug. 8, 1892, the Chicago Daily Tribune published a story about one of the newest “diversions” at summer resorts.

The newspaper called it a marshmallow roast.

Here’s how it would work. The person hosting a roast would buy two to three pounds of marshmallows and some fire wood.

He would then invite around half a dozen friends. This small group of fashionable individuals would traipse off to a secluded part of the beach for their roast.

Each person had their own marshmallow on a stick. Together, they’d all hold their marshmallows over the fire until they turn a warm golden brown.

It’s a task that “requires some skill,” according to the Tribune. If not handled carefully, marshmallows easily burn.

Most of us gobble up a marshmallow in one bite. The fashionable marshmallow roasters of the late 1800s, however, preferred to “nibble” at the treat at the end of their stick.

Another option is to nibble at another person’s marshmallow on a stick.

Apparently, all this nibbling at each other’s sticks was the perfect opportunity for flirting.

Please ma’am, I want some more

When Ms. Crew wrote the first recipe for this ingenious treat, she didn’t call it a s’more.

She called it a ‘some more’ – because it’s so good you’d want some more.

The instructions aren’t all that unfamiliar.

It says to toast the marshmallows over hot coals until they’re crisp on the outside and gooey on the inside.

Next, break the chocolate bar in half and place each half between two graham crackers.

Take your roasted marshmallows and press them onto the chocolate bar using the graham crackers. The chocolate will melt a bit as it comes in contact with the hot marshmallows.

Now, if you think that’s easy as pie, think again.

According to the National Marshmallow Roasters Institute (NMRI)—yes, there is such a thing—a lot of things can go wrong with a simple roasted marshmallow.

The group recommends a sharp stick with a long handle, a barbecue fork, or an MNRI-approved marshmallow skewer.

In a pinch, you can also use a metal clothes hanger.

For best results, the marshmallow should be placed 1 to 3 inches above the fire. When the bottom becomes a warm golden brown, turn the marshmallow to cook the other side.

The MNRI says a full turn after 5.25 seconds is the optimal turn rate for marshmallows.

What’s in a name, really?

Nobody knows for sure who began calling it s’mores. It’s been established that it wasn’t by Ms. Crew.

The first time the word s’mores appeared in literature was in a 1938 camping guide called Recreational Programs for Summer Camps. It was written by a certain William Henry Gibson.

Another book from the 1920s also contains the original recipe. It’s called 150 Recipes Prepared with Campfire, the Original Food Marshmallows.

Unfortunately, the book gave it the rather dull name of Campfire Graham Cracker Sandwiches.

When Ms. Crew wrote her recipe, she made it simple enough.

All you need are some marshmallows, chocolate bars, and graham crackers.

You only have to make a quick trip to the grocery store to find what you need for s’mores.

But did you know that these ingredients go a long, long, long way back before they even made it to the store shelves?

The marshmallow plant grows in swamps. If you haven’t seen one yet, it looks like a hollyhock.

Healers of ancient Greece and Rome used marshmallow sap for a variety of medicinal purposes.

Mostly, marshmallow was used to treat sore throat. It was also helpful for soothing inflammation.

It was the French who first thought of making a sweet treat that resembled what we have now.

By combining the juice extracted from marshmallow root with sugar and egg whites, they created a fat, foamy confection that served two purposes: to soothe a sore throat and taste good.

Unfortunately, making marshmallows out of actual marshmallows was laborious and expensive. It’s no surprise, therefore, that only the rich could afford to indulge in this treat.

When the Industrial Revolution rolled around, commercial confectioners found they could use gelatin instead of marshmallow juice.

The marshmallows you find on store shelves these days don’t have any real marshmallow in them.

A food worthy of the gods

Even three to four millennia ago, everybody loved chocolate. Look at the Olmecs, the Mayans, and the Aztecs.

Chocolate has been revered for thousands of years. Its Latin name, Theobrama cacao, means it’s a “food for the gods.”

At one time, it was so valuable it was used as currency by the Aztecs. One cocoa bean was worth one tamale, while a hundred beans would pay for a fat turkey.

When victims of Aztec sacrifice were too gloomy to join in ritual dance, they would be given cups of chocolate mixed with a few drops of blood from previous sacrificial offerings.

When Hernando Cortés landed in South America, the Aztec king Montezuma received him with a feast with plenty of chocolate to drink.

Unfortunately, the Spanish conquistador didn’t like the bitter beverage.

But by the 17th century, chocolate sweetened with a bit of honey or sugar was all the rage in Europe.

The first chocolate candy came to being when Joseph Fry added the cacao butter back into the cocoa powder.

In 1875, candlemaker-turned-chocolatier Daniel Peter put chocolate, milk, and sugar together. This was the first chocolate bar.

Peter teamed up with Henri Nestlé to sell his creation. It was called the Nestlé Bar.

Dry crackers for a dry libido

If chocolate can fire up the sex drive, graham crackers are the opposite.

At least, they were originally meant to be that way.

Presbyterian minister Sylvester Graham of the early 1800s thought the world was on the verge of moral destruction because of human’s propensity for sex.

He believed that the typical American diet made people lusty.

For example, he said that a dinner of steak and wine “increases the concupiscent excitability… of the genital organs.”

The solution he offered was a diet of bland food, exercise, sleep, and bathing.

After he died, the lackluster graham cracker went with him to the grave.

Fortunately, modern-day bakeries found that adding a bit of sugar would bring the graham cracker back from the dead.

The Future of S’mores

The bakers at Nabisco and the Chattanooga Bakery are often recognized as the ones who created s’mores prototypes.

But Loretta Scott Crew is the culinary genius who created s’mores.

Ever since her recipe was published in 1927, s’mores have turned from a classic campfire treat to a household name.

Classic s’mores have also evolved to include other fillings, such as peanut butter, lemon curd, and cheese.

The artist who created s’mores would be happy to find the many ways people are now adding to her invention.

What creative new s’mores can’t you wait to try? Let us know in the comments below.

← How to Deal with Negative People How to Make a Pottery Wheel →
Nicole Arce uses cookies to improve your experience. We'll assume you're ok with this, but you can opt out if you wish. Cookie PolicyOK
Privacy & Cookies